I have been using this page to document recent domestic and professional events, as well as a vehicle for my opinions, in the approximate style of a blog. Come back later for more updates.

After last year's work on converting the old garage into a gym, this year's efforts have been focussed on the area immedaitely outside. Previously, this was an open space, notionally for cars to turn around in, but in practice never really used for anything much at all.

So, I've cleaned the block paving, repainted the white rendering on the building, planted up a range of pots and planting boxes with colourful shrubs, moved in various items of garden furniture complete with parasols, and turned it into a kind of enclosed courtyard. It really catches the sun during most of the day and, now that there's more shelter from the persistent breezes, it has become a splendid spot to eat and relax outdoors.

(December 2013) It's been a busy autumn. Seb and I have been working hard, converting the garage, which has never had a car in it - just a load of what can politely be described as junk!

It's now become a gym, complete with machines and weights. We did nearly all of the work ourselves, employing professionals only for fitting the glazing and the final skim plastering.

Between us, Seb and I fitted the electrics, the insulation in the ceiling (and the rafters to hold it all up!), the plasterboards for walls and ceiling, painting, flooring and of course all the finishing touches.

We had quite a heavy weekend moving all the machines into their new places - those machines are extremely heavy, even when they have been partially dismantled to get them through the doors!

(April 2013) I was saddened to recently learn of the news that Iain [M.] Banks, the famous author, had been diagnosed with cancer and now has only a few months to live.

Apparently his most recent book (about to appear in print) will be his last. A real shame: I have enjoyed his works enormously, particularly his Culture series of novels.

In the spirit of respect (and entirely as a work of fan-fiction), perhaps now would be a good time to return to my own (currently incomplete) Culture novel Impact Analysis.

(April 2013) It's been seven years since I first started my Cooking for Men website. So it was about time it got a revamp.

I've spent some over recently reworking the site, so that each recipe gets its own page and the navigation is more fluid. I've also updated the graphics to a cleaner and more modern style.

(March 2013) When I joined the University of Manchester Computer Science Department (back in 1976 - I really am that old!), the main machine in use - shared by all of the staff and some students - was called MU5. (This was the fifth research machine constructed at Machester University.)

MU5 main processor was contained in two bays, each eight feet high, six feet wide and 40 feet long. There was a third bay for memory components. It filled the larger part of the main machine room on the top floor. It had chilled water cooling, 20,000 separate chips and needed 40 miles of cable!

Any modern smartphone contains between 100 and 1000 times more computing power - and still fits neatly into a pocket! How times have changed...

Then a Miracle Occurs

(January 2013) I've been very busy over the last year with real work, which unfortunately I can't go into here. This has meant I've had little time for writing and my progress on the Findo Gask series has really suffered.

To get myself back into the swing of writing, I've decided to make a start on a new collection of short stories. This has allowed me to explore all sorts of styles and genres and ideas, as well as giving me a sense of success and completion without quite so effort!

I've tentatively entitled this new collection ...Then a Miracle Occurs, which is also the title of one of the stories in the collection. The collection opens with my favourite little short story Hearts and Flowers which I wrote for my wife Tracey a few years ago.

A quiet Christmas at home this year. Rather enjoyed all the peace and quiet, although to be honest I spent quite a lot of it being ill and slowly recovering. I did manage to get some old-fashioned traditional cooking done, though - the Christmas cake was particularly spectacular. 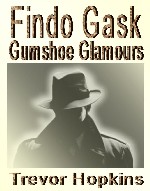 (September 2011) As has become my practice, once again I presented my wife Tracey with a new novel as part of her birthday present. This year's offering was Findo Gask - Gumshoe Glamours, the second in my series of novels which started with Findo Gask - Goblin Detective.

This year, we were not able to go away for Tracey's birthday. (On previous occasions, we had travelled to the North-East of England, and to Scotland.) However, Tracey did have a very relaxed weekend at home, which also meant that I was able to cook a special meal for us both: Crab Bisque topped with foamed cream, and Scallops cooked six ways, presented in separate little dishes on a slate! All washed down with Champagne and Pouilly-Fuissé.

Tracey said that she very much enjoyed the book, although there are rather more typos and other errors than I would have liked. I'll be fixing these up over the next few weeks.

How to Impersonate a UFO

(October 2010) I was delighted to receive email telling me that my short story How to Impersonate a UFO has been accepted for publication, in an anthology called Ways of Falling by EarlyWorks Press, sometime during 2011. 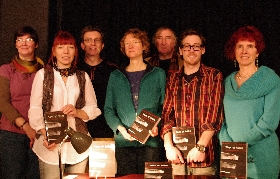 Update (February 2011) The launch of Ways of Falling went ahead on Saturday 19th February at the Calder Bookshop in London SE1. I'd like to think it was a considerable success. Six of the authors (including me) read from their own stories, all organised by Kay (the publisher, far left) and Adam (one of the authors, second from right).

My old friends Bruce and Justina came along to lend their moral support, took a great many photographs and even made sound recordings of all of the authors reading their own stories. The audio recordings can be downloaded from here.

(October 2010) An exciting time at work: A Sunday night fire in the electricity substation that feeds the entire site meant that all electricity was cut off. Fortunately, the fire was extinguished quickly (it didn't spread to the main buildings) and the emergency generators cut in, as is intended.

By Monday morning, one generator had failed, and we were hatching plans to close the site and relocate elsewhere. Furtunately, we managed to get a third generator shipped in by the evening, and the second generator was repaired and running normally by lunchtime.

With all the generators running, it felt less like a building and more like a Frigate! "All Ahead Full" Ching, Ching, Ching!... 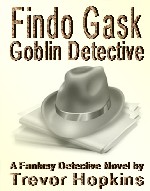 (September 2010) As is my habit, I once again presented my wife Tracey with a complete draft of a new novel for her birthday. This time, the book is called Findo Gask - Goblin Detective which I am describing as a hard-boiled modern detective fantasy. Think Eoin Colfer meets Raymond Chandler, or Artemis Fowl and Philip Marlowe.

This is a new genre for me and I found it quite a challenge to produce something with the right kind of gritty feel. But I was rather pleased with the results - and Tracey said it was my best book yet. Why not take a look and tell me what you think?

I have already started work on a sequel, called Findo Gask - Gumshoe Glamours. My eponymous hero Findo Gask returns, of course, and several of the characters from the previous volmue put in an appearance. This time, Gask teams up with a human Private Investigator, with alarming results. Just a few chapters so far; very much a work-in-progress. 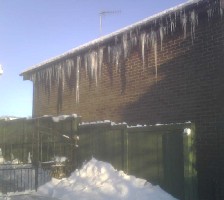 (January 2010) Like many places in the northern hemisphere, we had unusually cold and snowy weather for several weeks during and after Christmas this year. I spent a great many hours clearing snow from the drive and the road in the close - and building several piles of snow many feet high!

Fortunately, most of this bad weather was over the Christmas and New Year period, while I was on holiday, so travelling was not as badly affected as it might have been. It did make for a very festive Christmas appearance, too.

The extended period of cold weather allowed some very impressive icicles to grow. This set hung from the eaves of the house next door. You can also see one of the piles of snow that I created over the weeks. More of the snow was used to make an impressive Snow Man. 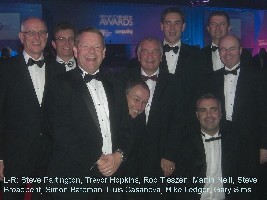 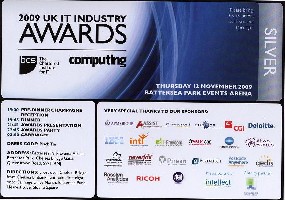 One of several projects I have been working on at Bradford and Bingley was a finalist in the BCS and Computing sponsered UK IT Industry Awards event. This was quite a grand event, with a champagne reception and four-course dinner, held at Battersea Park Events Arena on 12th November 2009.

Our entry was called IBM Transfer of B&B Savings to Santander, which was entered in the IT Project Team of the Year category (one of 18). It did not win, or even get placed, but we like to think that we put in quite a good showing.

It was a "black tie" event (my tie was actually black-and-white!), and we had representatives from IBM, Bradford and Bingley and Abbey/Santander around the table. A good time was had by all, with much wine and chat, and very late back to the hotel.

(November 2009) The beard had to go! Tracey was quite right when she said it made me look old. Far to much grey in most places. So now I'm back to being clean-shaven.

(September 2009) Tracey's birthday again. And once again, I took her away for a few days in the Northumberland area. This time, we stayed at Slaley Hall. This was a very relaxed few days, during what was quite a stressful time, and we enjoyed the usual round of picnics in the country and fine dining in the hotel. 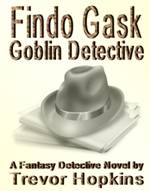 Even so, on the second evening, we elected to have fish-and-chips in the bar (with beer) rather than a more elaborate dinner in the main restaurant.

As on previous occasions, I also presented Tracey with a printed copy of my latest novel. This one is entitled Bridge of Stone and Magic, the fourth (and last) of my Lyndesfarne Bridge series. Tracey read this very closely and appeared to enjoy it a lot - she cried at the ending!

As a bonus, I also gave her a few chapters of my new work, Findo Gask: Goblin Detective. This is written in a very different style than the Lyndesfarne books - a sort of hard-boiled detective magical fantasy - and I hope to complete this one in time for next year's birthday. I've even set up a new domain (http://findo-gask.com) for this project.

(March 2009) I spent a weekend in Sutherland, in the very north of Scotland. The event was the annual Clay shoot on the Duke of Westminster's estate. I was poor at the shooting (even more so than usual!), the weather was wet and windy, and I got the Range Rover thoroughly muddy. Oh, and I enjoyed the scottish hospitality!

There were deer all over the place - especially on the road after dark. Here's a picture from the dining room of the place we stayed - note two deer in the middle distance, and the high wire fence to keep them out of the garden and from eating the lawn!

Older items of news can be found here.